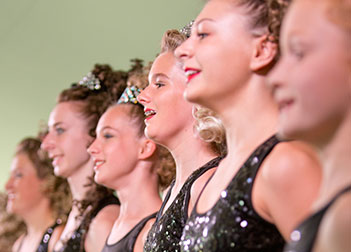 As members of An Chomhdháil, all teachers must adhere to the following standards:

An Chomhdháil, established in 1970, prides itself on the high standard of testing that goes into becoming a certified teacher. An Chomhdháil shares with An Coimisiún a rigorous system of examinations for certifying its dance teachers and adjudicators, and has similar terminology as noted above. In addition, there are equivalent grade examinations for competing dancers over the age of 8, and provide feedback and development of all aspects of dancing.

An Chomhdháil has over 28 regional branches with schools worldwide and is expanding rapidly throughout North America.

O’Grady Quinlan is proud to be the only certified school in the Lehigh Valley that is registered with An Chomhdháil, home to 5 TCRG and 1 ADCRG.

Colleen began dancing in 1992 at the age of twelve with Maureen O’Grady and instantly fell in love with the art form. She was soon competing in Regional and National Competitions and dreaming of one day having her own school.  In the year 2000, at the age of 20, she passed her TCRG exam and founded the Quinlan Academy of Irish Dance named after her grandparents. Now, after merging schools with Maureen O’Grady in 2005, she is co-owner of the O’Grady Quinlan Academy. Colleen continues to train dancers to reach the highest level of dance, many of which have gone on to win Regional and National titles. Her students have also had competitive success in Ireland, having several placed in the top ten at the World Championships and All Ireland Championships. In order to further her career in Irish dance she decided to take on the challenge of becoming an adjudicator. She passed her examination in 2012 and is now a certified TCRG and ADCRG with An Comisiun le Rince Gaelacha. Colleen now has the opportunity to adjudicate local, national and international competitions.

Colleen currently resides in Bethlehem, PA with her daughter Grainne who is an Open Champion dancer herself! Colleen enjoys sharing her passion for Irish Dance with every dancer who walks through the door. It is her missions to make sure dancers not only learn to dance, but learn positive life lessons that will help them through every step of life!

Maureen brought the passion of Irish dance to the Lehigh Valley, after earning a Bachelor’s degree from the University of Delaware and a Master’s degree from Lehigh University. Beginning at age 4, Maureen studied under Peter Smith, the esteemed President Emeritus of An Coimisiun le Rinci Gaelacha. Maureen enjoyed much competitive success as she competed at numerous championships and also demonstrated a desire to keep the traditions by going out into the community to share this inspiring form of dance and then eventually by getting her TCRG.  Maureen is proud to say that Colleen Schroeder was in her very first class! A teacher of children by heart, Maureen has recently retired as an ESOL instructor in the Allentown School District where she worked for over 16 years.  Maureen lives in New Jersey with her husband Patrick and loves to ignite a fire for dance in all the children that step foot into the studio!

Katherine began dancing at the age of 3 at the Cora Cadwell School of Irish Dance. During her 14 competitive years of Irish dance, she won many championships including the Leinsters, All Irelands, Great Britain’s and All Scotlands. At the age of 17, Katherine auditioned for Michael Flatley’s Lord of the Dance and was accepted to the show. She spent the next three years performing with the show primarily in Las Vegas and also completed a coast to coast tour of America. At the age of 22 Katherine passed her TCRG. In 2004 Katherine moved to Philadelphia and for the past 11 years has been actively involved in teaching Irish Dance at many schools in North America. Katherine joined the staff of OGQ in January 2013.

Katherine lives in Nazareth with her husband Dan and her four children Taidhg, Cian, Aoibhe and Senan. Katherine loves sharing her passion for Irish dance with all our students and loves to help train them to be the best dancer they can possibly be.

Erin started Irish Dancing at the age of seven under the direction of Maureen O’Grady and also Colleen Schroeder, when both teachers merged their schools as the now O’Grady Quinlan Academy of Irish Dance. During her close to 20 years of competition, she earned the titles of 5th and 3rd place National Champion, respectively, 5th place All Ireland Champion, World Medal Holder, and in her final year of competition, she won the title of the Mid-Atlantic Senior Ladies Oireachtas Champion. She earned her TCRG in 2013, and has been teaching with OGQ since. In addition to her decorated dance career, Erin also has an undergraduate degree from the University of Scranton in Community Health Education, and a Master’s Degree in Public Health from West Chester University. She is also a Certified Health Education Specialist. Erin currently works for one of the largest hospital networks in the region providing well-being services to employer populations across the Lehigh Valley (and nation) to help their employees lead happier, healthier lives. Erin and her husband John live in the Lehigh Valley with their daughter, Evelyn, who is already on her way to becoming an Irish dance champion herself! Erin is very passionate about Irish dance, and thoroughly enjoys sharing that passion with the students at OGQ.